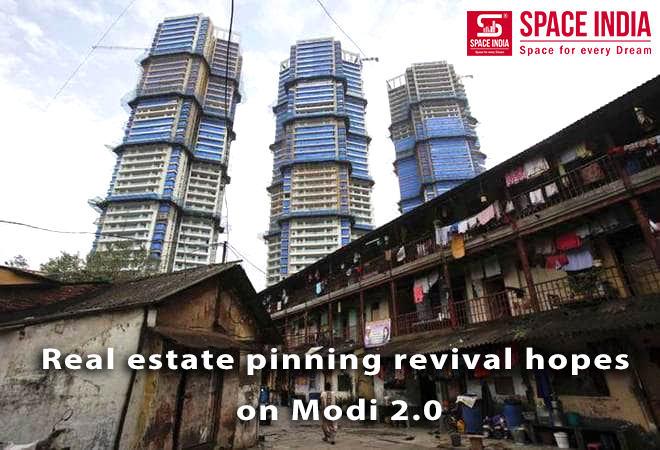 The real estate industry is now pinning hopes of revival on the BJP-led NDA government as the sector continues to grapple with delayed housing projects, piling up of unsold inventory and liquidity crisis that is hitting at its very roots. The target of Housing for All by 2022 also requires a renewed push by the government to become a reality.

The government inherits major issues that the real estate is still grappling with and which require immediate attention. “These include a surfeit of stalled or delayed housing projects, a massive pile-up of unsold stock across cities (paradoxically juxtaposed against a huge housing deficit), unaffordable property prices for the largest part of the Indian population, and the ongoing liquidity crisis of developers,” says Anuj Puri, Chairman – ANAROCK Property Consultants.

Real estate has been the worst affected due to drying up of liquidity following the collapse of IL&FS in September 2018. In 2016, demonetisation had already sucked out liquidity from the system and the setting up of RERA in 2017 added to the compliance costs for developers.  The imposition of GST further added to the stress for developers due to muted sales.

“The industry is hopeful that the government will redress and resolve the prolonged issue of liquidity crisis that the sector is facing currently,” says Niranjan Hiranandani, National President – NAREDCO and Managing Director, Hiranandani Group.

Rohit Poddar, Managing Director, Poddar Housing and Development, says the sector now hopes for better stability in the regulatory norms without too many changes. “The industry now wants the new government to emphasise on re-energising the reforms related to infrastructure investment and land acquisition reforms. We expect the government would take measures to expedite and streamline the environment clearances for the new projects, which is a two-stage process and takes two-to-three years,” he says.

Hiranandani said rationalisation of taxes by subsuming stamp duty under GST will be a big relief to home buyers. “We also recommend the National Housing Policy to boost rental housing in order to fulfil the ambitious target of Housing for All by creating surpluses,” he adds.

Puri said the government’s initiatives taken in the last five years need to be fostered to usher in a credible, logical, well-regulated and attractive real estate landscape.

“With Modi 2.0, we can expect the steady momentum that the real estate sector has been regaining in recent times to not only maintain its pace but pick up speed. Some of this government’s initiatives will now doubtlessly sail through to the final stage of their journey,” he adds.

Is monsoon season a good time to buy a property?

NRIs, can earn up to 35% returns on realty in certain areas in India

Why Panvel Should Be Your Next Real Estate Investment Destination

PANVEL-KARJAT: ON THE RIGHT TRACK